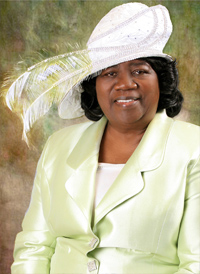 Dr. Murray’s role as Founding First Lady of the F.G.H.T., Inc is befitting of the radiance, wisdom and gracefulness that she brings to the leading role. She is a woman of impeccable integrity and indomitable patience. She is one of God’s anointed messengers with a message of inspiration, hope and deliverance. Her message taps deep into the inner sanctum of the soul. Endowed with a ministry of compassion, her calling extends beyond the podium and the pulpit. She is noted in Dallas, and throughout the state for her sensitivity to homeless and underprivileged persons, through her reputed Helping Hand Outreach Ministry. Founded in 1981, this  humanitarian outreach gives food and clothes to needy families throughout the year. Dr. Murray’s philanthropic efforts are frequently applauded by state, civic, and social organizations with plaques and special recognition awards. Most notable among her outstanding recognitions is being awarded the Outstanding Black Texas Award by Texas Congresswoman Eddie Bernice Johnson.

Additionally, she is founder and president of the Shirley Murray Child Development Center. Under her auspices, the institution’s curriculum is designed to develop the whole child: mentally, physically, emotionally and spiritually. Of paramount concern to her is maintaining the CARE in day care. The state licensed and accredited facility ranks among Dallas’ top preschools. Dr. Murray also serves as co-founder of the Lobias Murray Christian Academy, the first K-12th grade, fully accredited, African-American owned private school in Texas.